Graduated in Technical Telecommunication Engineering, Agriculture Technician and acclaimed inventor, he is remembered with gratitude by his family, by his colleagues at the Polytechnic University of Valencia. He studied with enviable marks and surrounded by the countless friends he had in all social and economic classes as he was an intelligent and disinterested man who used to value more the benefits that his inventions brought to collective knowledge than the economic profit that could get from them.

He was born in Valencia to an upper-middle class family on October 16, 1966, in a very complicated twin birth where his brother lost his live, and he and his mother were miraculously saved. At that time his family lived in a flat in Camí Real, in the town of Catarroja, an agricultural and industrial Valencian village placed close to the Albufera where the eels are extracted and are cooked with the world famous receipt ‘All and Pebre’.

After seven years of marriage his birth brought a huge happiness to his parents. His father was Mr. Vicente García Puchalt, a great salesman of Valencian furniture. His mother was Carmen Salanova Portoles, although she was a housewife she was gifted for drawing and painting. Furthermore, her vocation during her adolescence was polished while she was attending the painting studio of Mr. Manuel Sigüenza, disciple and friend of the illustrious Valencian painter Mr. José Benlliure, in C/ Del Mar de Valencia as a student.

Also as a teenager, he built a sound transmitter that allowed him to talk to his friends without having to use the phone.

Then he continued his studies in the nearby town of Torrente, in the prestigious AUSIAS MARCH school, where he stayed until he finished his bachelor's degree and obtained excellent grades. Being a brilliant student allowed him to access to the Polytechnic University of Valencia, where he began his studies in Telecommunications Engineering with a great vocation.

He stayed at the Polytechnic University from 1989 to 1997, and during that time he polished his innate vocation as an inventor, because as a child he already surprised his social environment by creating a signal transmitter. This invent, which was installed inside a matchbox, allowed him to roll the rotating platform installed in the garage of his house without leaving the car, turning on itself to facilitate the exit of the vehicles, with little maneuvering.

Vicente, who was not a practicing Catholic but had a solid Catholic background, always said that much of the success of his inventions was due to what he considered a miracle of La Mare de Deu dels Desamparats, which inspired him to watch an advertisement at a bus stop where it was offered a CASIO television and an ERICSON mobile phone. He bought them and observed them carefully and thereafter he began to develop new applications of images and sounds which would give rise to the great technological innovations that appear in the Patents that immortalized his name. His contributions to the technology improved the quality of life, since it was Vincent who created, among other things, certain applications that are now carried by our mobile phones and that are very useful to us.

After adequately protecting his inventions at the Spanish Patent Office, he applied to IMPIVA for what is called a Report on the State of the Technology, which showed that Vicente was the pioneer in transmitting moving images that could be received on his mobile phone. Not even the daring Japanese had managed to do so, it was quite a spectacle to see how happy he was to enter his home. He told his mother, while shouting, ‘Mareeeeee soc el primer, soc el primer’ [‘Motheeeeeeer, I’m the first one! I’m the first one!’ in Valencian language] then presented them to an important Valencian company dedicated to intercoms, whose name we don't want to remember, and claiming that the high manufacturing costs made it unfeasible to put them on the market, they ignored the ingenious innovations that Vicente offered them.

The wireless systems that protected the three Patents, were distinguished with the names of NOVA COMUNAL, NOVA 2 and SALANOVA, and after making a thorough study of costs, was able to demonstrate that its installation was more economical than those that were usually mounted, since it saved many meters of cable, much labor, and could also take advantage of the installation and the antenna of the existing television and leave a channel for the transmission of images in real time, anywhere, in an ‘Intelligent Building’. 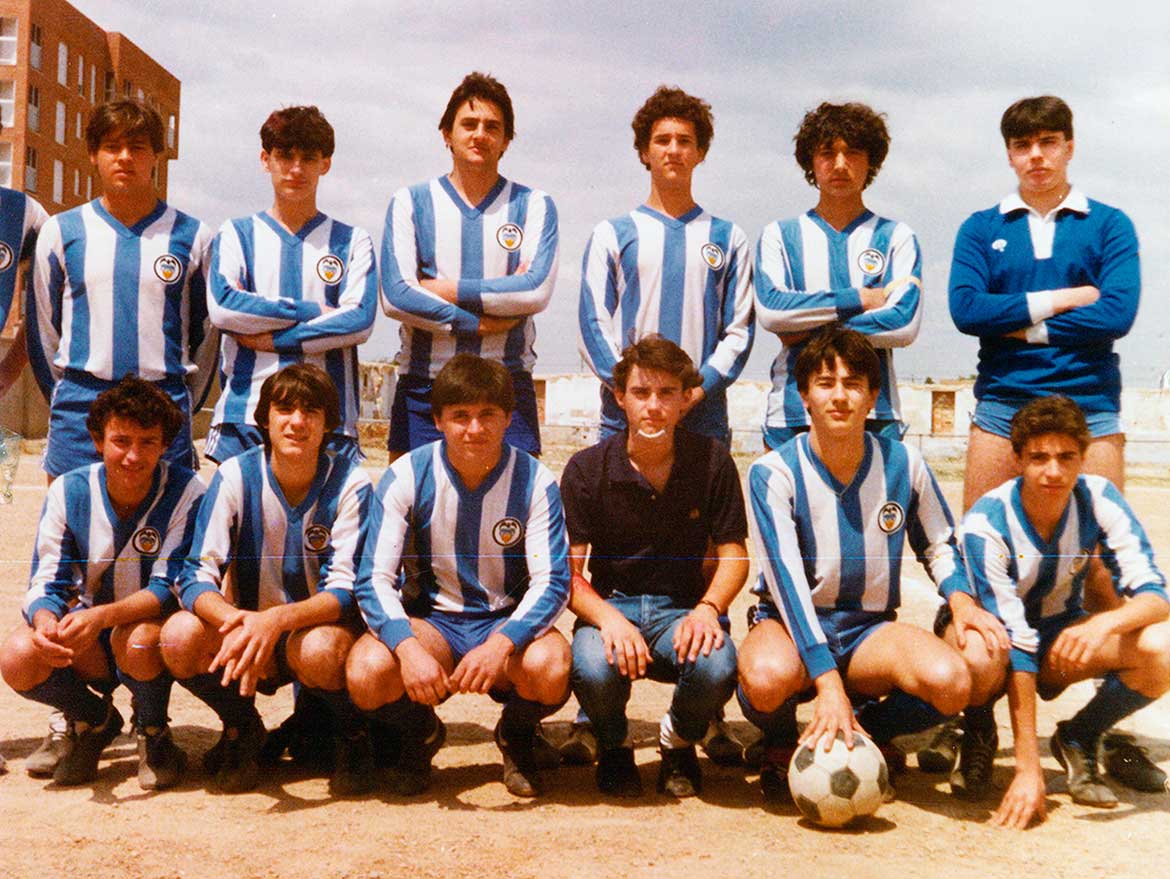 Vicente was sociable and a sporty man

But not even with these tries he managed to get the Delegations of the big multinationals he visited -accompanied by his father- to ask for a License of Use, saying that they preferred that the Americans and Japanese should be the ones to innovate given that in Europe, because of their vulgar comfort, they commercialize what they invent.

This contempt motivated Vicente's father death with the regret of not having flown with his son to the United States in order to promote properly his son’s inventions. Maybe it would have been different if in the country where the headquarters of the multinationals that monopolize the advances in technology they didn’t deal with distribution intermediaries like those in Madrid and the chances of success would have been greater. They also had the moral support of the Mayor of Boston, who had a certain friendship with the family.

Despite the countless expressions of admiration that his creations aroused in the intellectual circles of the faculty, among his neighbors and friends, and even political personalities such as the former Mayor of Boston, something as big and as innovative as his wireless structure for intelligent buildings was despised, the murky commercial interests did not want to manufacture these innovations and prevented Vicente from seeing how the fruit of so many years of his work led the telecommunications market.

Pictured here is the former mayor of Boston, a friend of the family.

After the disappointment of seeing that his inventions did not have the acceptance they deserved, to see his father suffering, who at that time began to develop prostate cancer that although he was transferred to Pamplona and treated with the most advanced means, without caring about the great economic effort they had to make to cover the costs of such expensive treatment, ended his life.

To make matters even worse, in those days the relationship with the woman who for many years was his girlfriend was broken. So much negative stimulus together made Vincent enter a depressive spiral that led him into a state of obsessive neurosis, in which he constantly felt persecuted and observed.

In order to provide him with a distraction that would relieve his mind of so much stress, his mother encouraged him to dedicate himself for the time being to farming, which would keep him busy and make him forget so much adversity.

To begin his agricultural journeys, he rented two plots of land very close to the port of Catarroja, and bought the best melon seeds from a prestigious garden centre in the nearby town of Pinedo. His mother still remembers with emotion the moment when Vicente gave her the first melon that sprouted from that harvest.

Despite the high quality of the melons in question, that year there was an overproduction that saturated the market and as the supply was greater than the demand, prices fell so much that many farmers decided not to take them from the field to be used as fertilizer.

Faced with this situation, Vicente, who always defied the adversities, proceeded to store the melons in the large courtyard of his house, and there his mother and aunt, with the promotion of "buy two and we will give you the third one", managed to sell a lot of melons. Given that their house is near the Municipal Market and they were also in contact with neighbours and passers-by and had a good time, that is, the economic balance was not positive, but as a first agricultural experience, it was not bad.

Encouraged by agriculture, he decided to buy a beautiful plot of land in the neighbouring town of El Romaní, which was ideal for growing persimmon, and after a suitable study he concluded that by structuring the plantation in a particular way he had devised, production could be increased considerably.

Around this time, Vincent's health began to deteriorate, and a doctor who was a friend of the family sent him to the oncologist when he saw him limp, and there they received the fatal news.

From here on, Vicente, always with admirable integrity, without collapsing at any time, collaborated with the doctor who attended him, he himself interpreted the diagrams of his analyses, and he himself calculated the intensity of his chemotherapy.

His illness became worse and worse, and at the end of his days he couldn't speak, so one day on December 22 he died trying to create the last of his inventions, an electronic means of communicating with his mother.

In spite of the unfairness of the partnership with him, in spite of the fact that he did not find any support to carry out his pioneering inventions in the field of telecommunications and the creation of new energies, he died feeling misunderstood and finalizing the details of a system that would have allowed the City of Catarroja to provide itself with energy at zero cost. But as he had no room for resentment, he decided to bequeath to the Catarroja Town Hall, which was his last home, a beautiful mansion of more than 600 meters, built according to the architecture of the late nineteenth century, prepared for the cart with the horse to pass through the central corridor to reach the stable, with housing quarters, interior courtyard, and a huge "Andana", where the products of the generous land were stored and preserved.